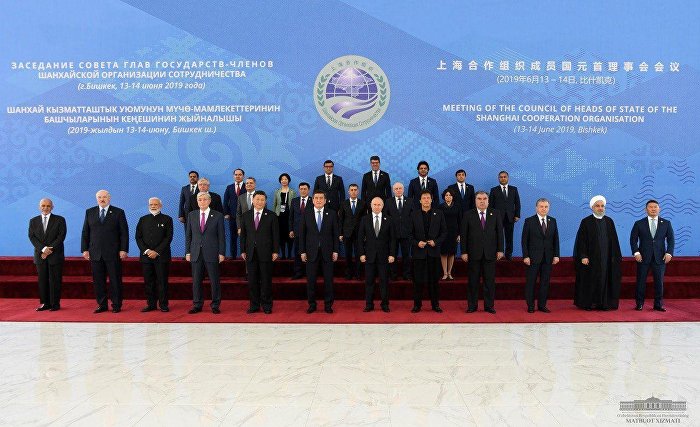 Shanghai Cooperation Organization (SCO) Summit 2019 was held on June 13-14 in Bishkek, the capital city of Kyrgyzstan, as the country held the SCO presidency during 2018-2019. Leaders of Russia, Kazakhstan, China, Tajikistan, Uzbekistan, India and Pakistan took part in the meeting representing the member states, whereas leaders of Afghanistan, Belarus, Iran and Mongolia participated as observers.

According to President Sooronbai Jeenbekov of Kyrgyzstan, the agenda for the SCO in the upcoming year will focus on economic components, implementing a whole range of investment projects, establishing the SCO Development Bank and the SCO Development Fund, as well as creating favorable conditions for international road transport. The SCO member states also intend to continue their support for the Belt and Road Initiative with the main goals of furthering economic development and infrastructure projects. Within this context it is especially important to accelerate the implementation of the China – Kyrgyzstan – Uzbekistan railway construction project.

In this year’s Summit, the member states issued the Bishkek Declaration of the Shanghai Cooperation Organization’s Heads of State Council (Bishkek Declaration) as its conclusion. Through the Bishkek Declaration, expanding and diversifying roles of the SCO are seen. Formed in the mid-1990s, the SCO was initially a regional organization dealing specifically with the border disputes and militant extremists in the region after the disintegration of the USSR. Contrary to a popular view that the SCO would emerge into a security blog that counters the West in the post-Cold War era, the SCO has emphasized especially in the Bishkek Declaration its commitment to ameliorate the existing international framework, which has grown to be more polycentric. The Declaration highlights the supremacy of international law, particularly the UN Charter. Security, sustainable development (UN 2030 Agenda), mutual respect of sovereignty and national interests are central to the international order to which the SCO aspires. The idea of creating a community with a shared future for humankind, originated from Chinese President Xi Jinping, is mentioned.

A continuation of focus on the member states’ security concern can be seen in the Bishkek Declaration. Emphasis has been placed on the cross-border nature of security threats. Anti-terrorism will be a priority for the SCO, as it has been. The preventive method against the spread of extremist ideology, including those through the cyber space, will be taken. One of the on-going security hotspots that is of SCO’s concern is Afghanistan. Bordering a number of SCO member states and being a SCO observer state itself, Afghanistan is a key to the preservation and enhancement of security and stability in the SCO space. The Bishkek Declaration stresses that the SCO is supportive towards an Afghan led peace restoration via political dialogue with the cooperation and coordination of international organizations. It is evident also in the Bishkek Declaration of SCO’s wish to articulate its stance on security issues beyond the SCO space, as in its advocating of a Syria settlement through dialogue.

SCO has also been widening its scope of concern beyond the issue of security and put increasing effort in the development of an integrated regional economy, as well as contributing to global economic governance. The Organization has stressed the need to maintain a multilateral international trade system based on the authority and effectiveness of the World Trade Organization (WTO) rules and regulations.  Furthermore, the participating states of 2019 Summit recognized the importance of regional developmental initiatives, e.g., the Belt and Road Initiative and the Eurasian Economic Union projects. The member states realize the need to align these initiatives and consider that the SCO can contribute as a platform to such regional integration given its considerable potential for trade, economic, and investment relations built up over the years. Moreover, innovation and digital economy are brought forth as key factors for medium and long term sustainable economic development. SCO member states will put collective efforts in the fields of innovation and information technology.

“Bishkek Declaration of the Shanghai Cooperation Organisation’s Heads of State Council.” Embassy of the Republic of Kazakhstan in Hungary. June 14, 2019. Accessed July 19, 2019.