Why isn't the BRI a strategy of China?

Global Times Jan 22, 2020 read: 1049 collection: 0 A   A   A
#East Asia #Economy #Commentary #Politics #Trade #BRI #Global Times #China
​Much of the fiery rhetoric about the "China threat" theory in the US, including analysis of some important research institutes, is based on the notion that the East Asian country has a strategy of expanding its sphere of influence in a bid to supplant the US. 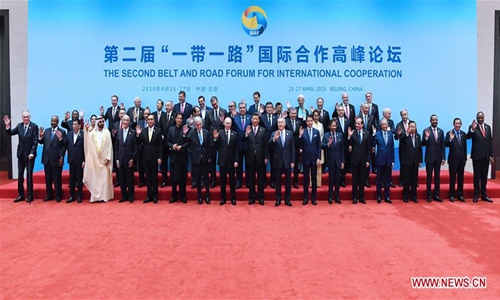 Much of the fiery rhetoric about the "China threat" theory in the US, including analysis of some important research institutes, is based on the notion that the East Asian country has a strategy of expanding its sphere of influence in a bid to supplant the US.

The Council on Foreign Relations, a US think tank, recently published a report titled "Implementing Grand Strategy Toward China," saying, "Washington should launch an all-out effort to limit the dangers that Beijing's economic, diplomatic, technological, and military expansion pose to US interests in Asia and globally." They report claims the US is "at a major strategic disadvantage because China does have a grand strategy."

Does Beijing have a grand strategic design? Certainly it has. Yet its strategy is mainly for the domestic politics. The strategy gives shape to the goal of China's development, instead of building a sphere of influence directed at the US or other forces, and without the purpose of replacing the US, although it may increase the competition between the largest and second-largest economies in some domains.

Regarding China's development strategy as a challenge to the US reflects the zero-sum mind-set and a misunderstanding of the country's politics. It does not rule out the possibility that some US experts and politicians intend to encourage Washington to more proactively build its foreign strategy by using this rhetoric in an attempt to guarantee US' global leadership.

On the pretext of dealing with "China threat," the US has been promoting its Indo-Pacific Strategy, trying to establish its sphere of influence to contain China. Obviously, Beijing is capable of creating a similar alliance. But doing so would repeat the old path of the Cold War, accelerating the division and the confrontation in the Asia-Pacific region and the world. This is not consistent with China's purpose of focusing on domestic development, nor is it what most countries want to see.

Western strategists have intentionally or unintentionally ignored the fact that China has not called the "Belt and Road" a strategy, but an initiative. One of the reasons is that the Belt and Road Initiative (BRI) is not China-centric, nor to create an alliance. BRI is a cooperative initiative targeted at development. It aims to build a platform to achieve joint development with other countries. China does not engage in building a closed circle excluding other countries.

Washington's strategic urgency comes from its traditional perception of international relations. It cannot be denied that this strategy has some appeal, because many countries did achieve their independence and begin to advance in the existing order which has continued the traditional geopolitical logic; for example, the rising great powers will pursue hegemony and will engage in conflicts with existing great powers. Some countries have already been US allies, while others had frictions with China on a number of subjects in the past. The point is that China will not follow this logic.

China's growing global influence is a spillover effect of its development. The country's development is internally driven, releases energy through reform and opening-up and still many problems lie ahead to be addressed. It's fundamentally different from the early wealth accumulation of the West. Therefore, even though China is also going global, its way differs from the West, not to mention that today's world is totally different from the era of Western expansion.

I suggested the idea of "de-Americanization" more than 10 years ago, as I thought China couldn't, and wouldn't, follow the Western path of development. If there is a second US in the world, then the two "Americas" will fall into the "Thucydides trap."

A challenge to the US and the West is that if they keep viewing and defining China with traditional strategic concepts, continue to pile pressure and even contain it at the cost of decoupling with the country, will they eventually create a China that confronts them?

If we can view China in the changing world from the perspective of globalization and multipolarity, we may see the dawn of sustainable stability and peace in the process of Beijing going global.