The Bangkok Post Jan 17, 2020 read: 1164 collection: 0 A   A   A
#Asia #Commentary #Diplomacy #Economy #Politics #Trade #Xi Jinping #China #Myanmar #The Bangkok Post
China's president Xi Jingping will today kick off a two-day state visit to Myanmar which is likely to set the course of their future bilateral relations. 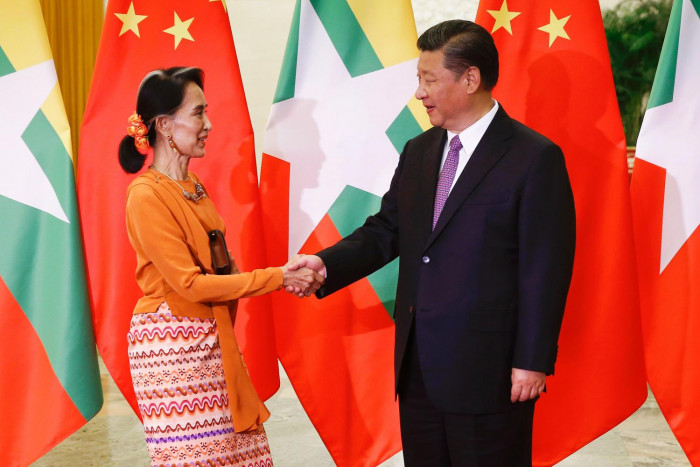 China's president Xi Jingping will today kick off a two-day state visit to Myanmar which is likely to set the course of their future bilateral relations. While the visit is highly significant for Beijing, Myanmar is more hesitant, fearing it is becoming over-dependent on its northern neighbour, according to analysts and diplomats. But the visit certainly is a public endorsement of the special relationship that has formed between the two countries, and may herald a new era of strengthened relationship.

"[This visit] is extremely important, as it is likely to go a long way in defining the course of Myanmar-China bilateral relations into the future, especially under the watch of the NLD [National League for Democracy] administration led by Aung San Suu Kyi," according to Moe Thuzar -- a regional specialist and Myanmar programme coordinator at the Singapore-based think-tank, the ISEAS-Yusof Ishak Institute.

Nevertheless it is much more than a symbolic occasion, according to most analysts, and a plethora of bilateral agreements on investment and trade are in the pipeline. These are the concrete dividends of such high-level visits -- often the result of months if not years of prior bilateral negotiations. "These deals, apart from the symbolic setting of signatures by the principal players, will also define Myanmar's geo-economic future," Ms Thuzar added.

For China the visit is of the utmost importance, according to the China specialist Yun Sun, senior fellow at the US-based Stimson Centre. "It's all part and parcel of Beijing's projection of soft power, with the intention of winning the hearts and minds of the whole of Myanmar, without whom their strategic 'Belt and Road' initiative south-westwards will stall," she said.

This is the Chinese leader's first foray abroad in 2020, and the first visit by a Chinese president in almost two decades, since Jiang Zemin's historic visit in 2001. Although it has been on the cards for some time, the trip reflects the significance Beijing places on its relations with its southern neighbour. The fact that it also coincides with the 70th anniversary of bilateral relations is also more than symbolic.

A measure of the importance Beijing places on the visit was the fact that the pre-trip briefing to journalists and diplomats in Beijing was given by Vice-Foreign Minister Luo Zhaohui -- whereas it would usually be left to the foreign ministry spokesman. "This reflects the seriousness of the visit in Beijing's mind," Ms Yun suggested.

In his briefing last week, Mr Luo stressed the importance of the country's bilateral relations with Myanmar, and said that during the president's trip, the two countries would seek closer economic and trade cooperation through Beijing's Belt and Road Initiative (BRI). However he also suggested political issues, including the problems in Rakhine, would form part of the visit's bilateral dialogue.

Since October 2016 nearly a million Muslims -- who call themselves Rohingya -- have fled the violence in Myanmar's western strife-torn region of Rakhine to escape the military's clean-up operations in the wake of two unexpected Arakan Rohingya Salvation Army (ARSA) attacks -- a year apart -- that killed some 20 border security guards.

The fleeing refugees accused the military of intimidation, rape and summary executions. Successive UN reports documented large-scale human rights abuses against the Rohingya and labelled it a campaign of ethnic cleansing with genocidal intent. The Myanmar government and the military have persistently denied these accusations. Negotiations between Bangladesh and Myanmar over the repatriation of the refugees have stalled.

President Xi plans to raise the issue of repatriating Rohingya refugees during his meetings with both the country's civilian leaders and the military top brass, according to the vice foreign minister. China has tried to be an honest broker between Myanmar and Bangladesh on this issue, Mr Luo said. "At the request of the two countries, China has played a constructive role in this regard, including trilateral talks on early repatriation."

The whole issue of Rakhine -- the return of the refugees, reconciliation in Rakhine between the various communities, economic development and the continued fierce fighting between the Buddhist Arakan Army and the Myanmar military -- will undoubtedly be discussed. And of course China's support in shielding Myanmar from international criticism and pressure, especially with the issue of the International Court of Justice (ICJ) -- which is considering whether to impose internationally binding provisional measures on the Myanmar authorities and will deliver its verdict later next week -- will also be considered.

But there is also no doubt that the Chinese-Myanmar Economic Corridor -- which has been at the centre of their bilateral relations since Ms Suu Kyi became Myanmar's state counsellor and de facto civilian leader four years ago -- will feature prominently during bilateral discussions. These will focus on the Kyaukphyu project -- the controversial port and surrounding special economic zone (SEZ).

"It will be one of the most substantive issues discussed during the visit -- for Beijing it's of critical strategic importance," said analyst Yun. But it has proven controversial ever since a Chinese company won the bid to build it more than four years ago. Progress on the project has been very slow, leaving the Chinese consortium frustrated and impatient.

Myanmar's deputy commerce minister said at least two bilateral agreements on the Kyaukphyu SEZ will be signed during the visit. Though Beijing maybe pushing for more: "The push on Kyaukphyu is certainly more than symbolic," said Ms Yun. "China wants action, movement and progress."

For both countries, this bilateral relationship is extremely important. In Beijing's case, it's central to their strategic vision. It involves border security, access to the Indian Ocean and countering US influence in the region, said Ms Yun. "It's winning the 'hearts and minds' in Southeast Asia: showing China's benevolence through the example of Myanmar," she said. For Myanmar's diplomats, the Rakhine issue, especially the recent ICJ proceedings, have left the country with no alternative but to turn to their Asian partners. Nevertheless Xi Jingping's visit is of monumental importance to both countries.