Belt and Road Initiative explained: how China is looking beyond borders (SCMP)

Apr 26, 2019 read: 1360 collection: 0 A   A   A
#References #Maps #Infrastructure #Trade #BRI #Belt and Road Initiative #Maps #Graphics
The Brussels-based think tank Bruegel set out to gauge perception of the belt and road scheme among participating and non-participating countries. Using the Global Database of Events, Language and Tone, Bruegel conducted an analysis of broadcast, online and printed news from 132 countries between May 1, 2017 and April 25, 2018. Generally, the study found the belt and road scheme to be well perceived, with no significant gap between those countries participating and those which do not. 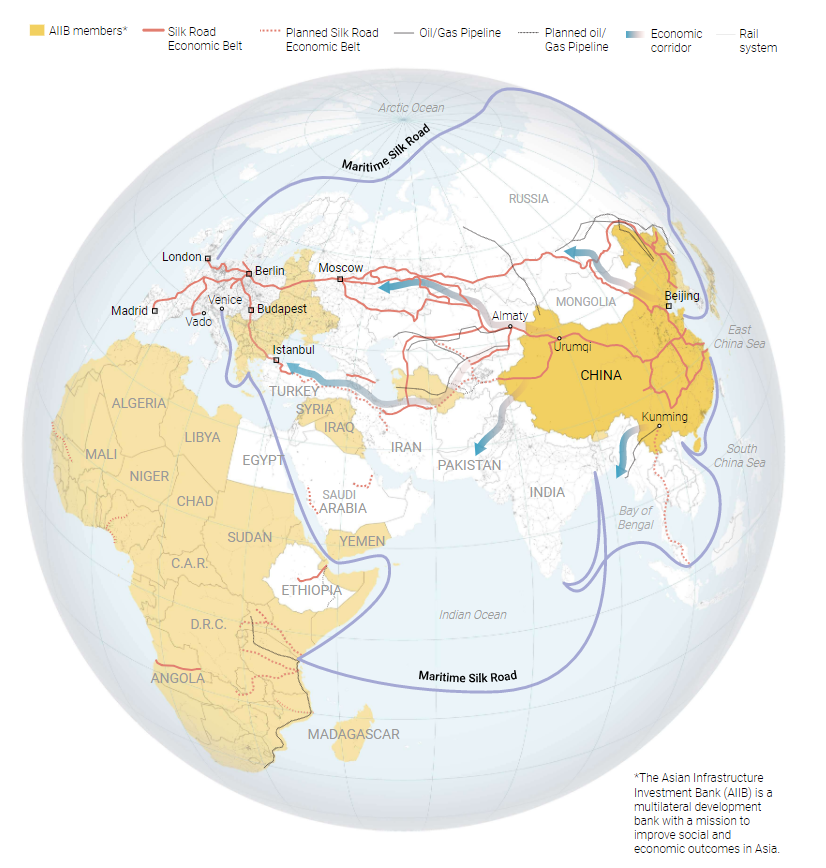 The Belt and Road Initiative was announced by the Chinese government in 2013 as a global trade strategy based on the ancient Silk Road trading route.

It aims to develop a new Silk Road economic belt and 21st century maritime Silk Road by promoting economic cooperation across Asia, Africa and Europe. The initiative combines new and older projects and includes improved soft and hard infrastructure, and even cultural ties.

China is providing massive financing to participating countries, which currently officially number 66, for the development of infrastructure. Many of the recipients are developing countries which see China’s plan as an opportunity to boost their local economies. There is no firm evidence to date of how successful these projects have been in fulfilling the expectations of participating belt and road countries, but there are concerns that some projects lack regulation and coordination with existing markets. Critics of the belt and road scheme believe it represents a risk for participating countries that they will be left with unprofitable, unnecessary infrastructure. One of the biggest global concerns is that developing countries will be left with a debt burden to China which they will be unable to meet.

The tone of media coverage about the belt and road scheme in specific articles published in a country was calculated and the result was then aggregated with the average sentiment at country level, to build a scale, from the highest positive sentiment, 4.98 points (Botswana) to the lowest -2.8 (the Maldives).

Also included in this visual analysis is an index of Operational Risk, developed by The Economist, which uses 10 criteria to quantify the risk to business profitability, based on present conditions and expectations for the median term.

Among the criteria are: security, political stability, government effectiveness, foreign trade, the legal and regulatory environment, measured by a score from 0 to 100. Combined, the measurements of sentiment and operational risk in each country help to provide an understanding of the current scenario for the belt and road programme.

Under the belt and road programme China provides loans to participating countries to develop their infrastructure. In a developing economy, infrastructure is the main engine and guarantee of growth but, when a country incurs too much debt without sufficient economic growth, the impact can be negative on people and the economy, as domestic spending on welfare and social services may be sacrificed to service the debt.

According to a report from the Centre for Global Development, these are the 20 belt and road countries most vulnerable to debt distress: 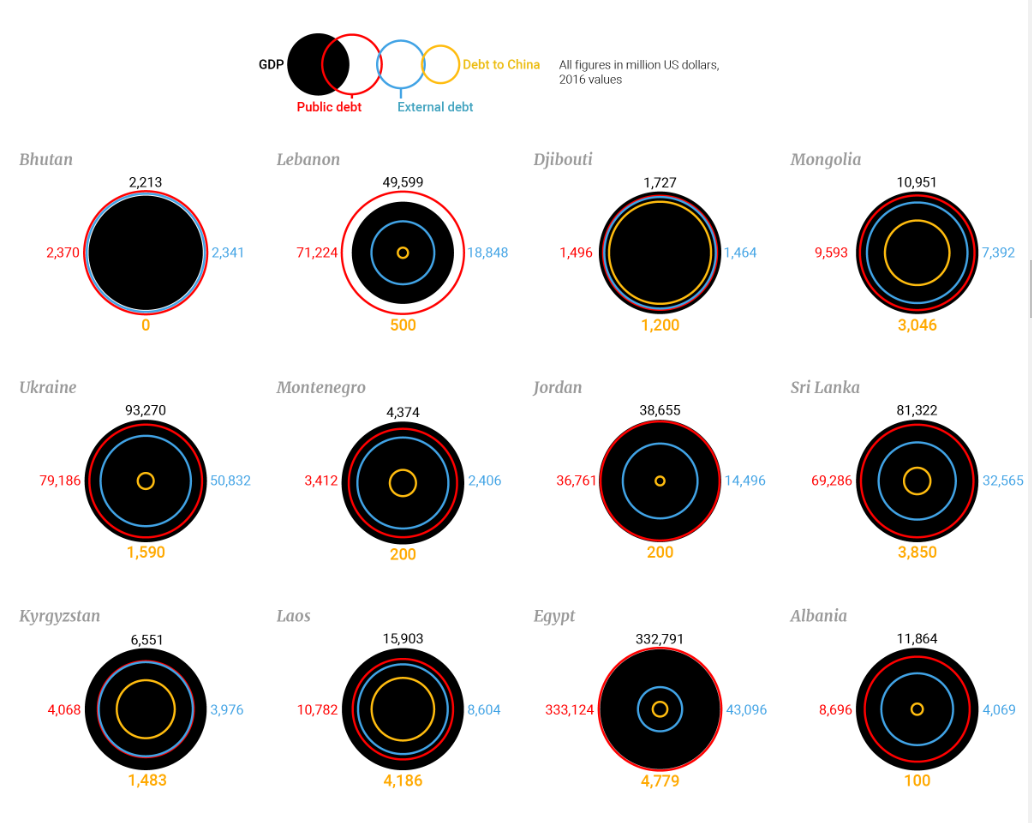 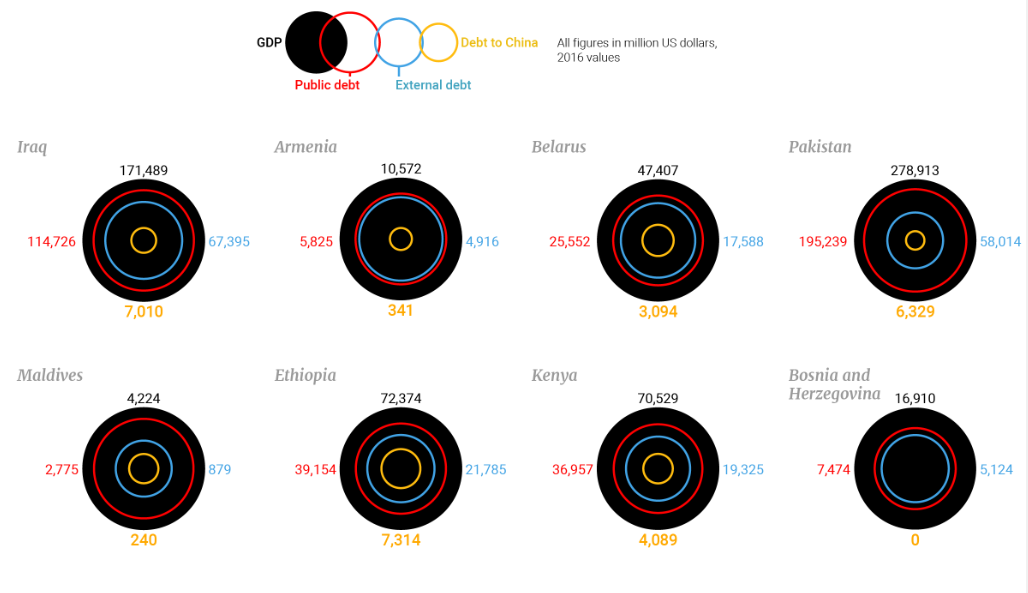 GEO-ECONOMIC VIEWS FROM OTHER NATIONS

The great powers each have very different geo-commercial strategies, but all are characterised by an ambition to develop economic expansion plans which include neighbouring countries and, in many cases, other parts of the world. Initiatives include large communication infrastructure projects, diplomacy and closer economic ties and cooperation.

Let's take a look at these initiatives that focus on Asia as an important part of their geo-economic vision.

Russia leads the Eurasian Economic Union, integrated together with Kazakhstan, Belarus and Armenia, and is considering strengthening this group through economic and diplomatic ties with the belt and road plan. Its geo-economic goals include expanding its natural gas pipelines to China.